Permament relationships: the channel can remain open up to an indefinite time and does not require intermediaries 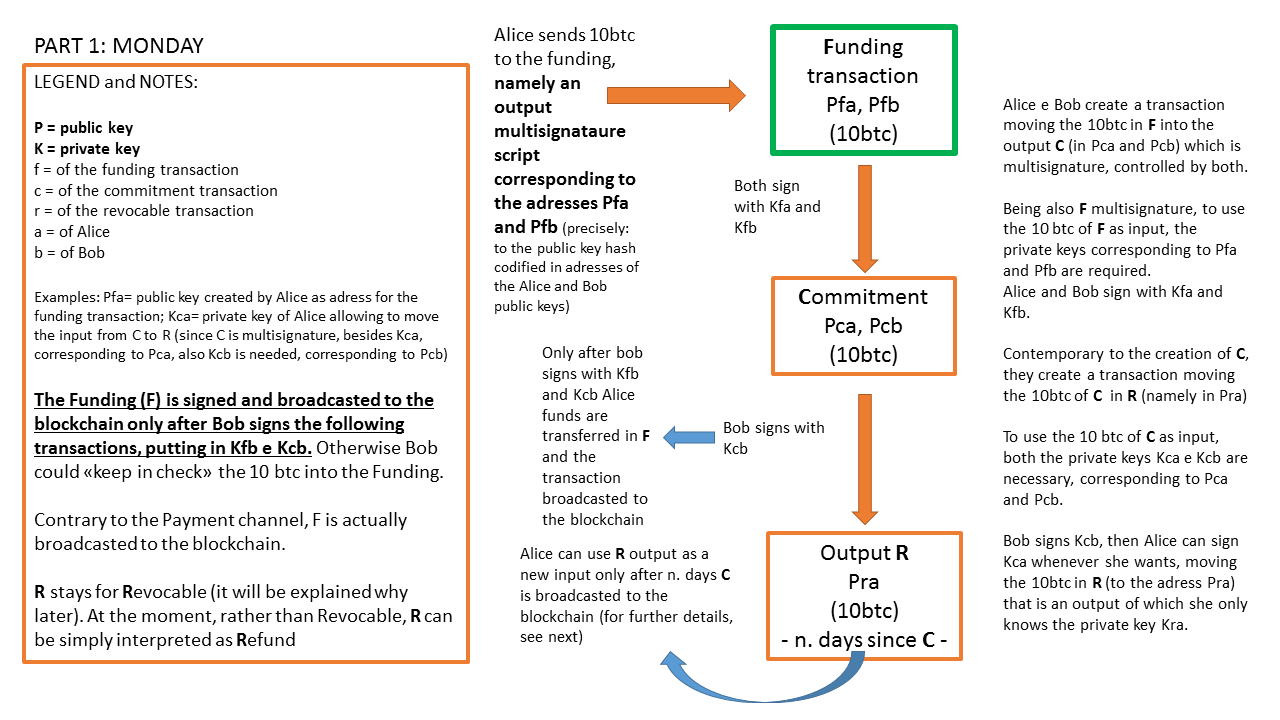 F is the transaction «mother», C is F’s child and R is C’s child.

After C and R have been created and signed by Bob, F is broadcasted to the Blockchain. Alice doesn’t broadcast before, otherwise she would lose her bitcoins – or more precisely – Bob could keep them «in check».

Since Bob already signed with his own private keys of F and C, Alice can sign and broadcast to the blockchain C and R whenever she wants.

Besides that, Lightning Network required other changes already implemented by means of a soft fork:

Thanks to the soft fork of July 2016 at block #419328, besides nLocktime, another transaction parameter has been introduced: CheckLockSequenceVerify.

With this parameter it is possible to make available the output of a transaciton x after a certain number of blocks are created consequently to the registration into the blockchain of a given transaction y.

In the example above, the input of R can be used as output only after n. blocks (parameter «nSequence» subsequent to C.

Until C is not broadcasted, the channel between Bob and Alice can remain open permanently.

As will be exposed, neither Bob nor Alice have interest in broadcasting C (except in cases of fraud/theft).

Lightning Network: how the channel works

That is, how Alice and Bob trade goods and services in exchange of bitcoins by means of a permanent bilateral channel opened with only one transaction F broadcasted to the blockchain 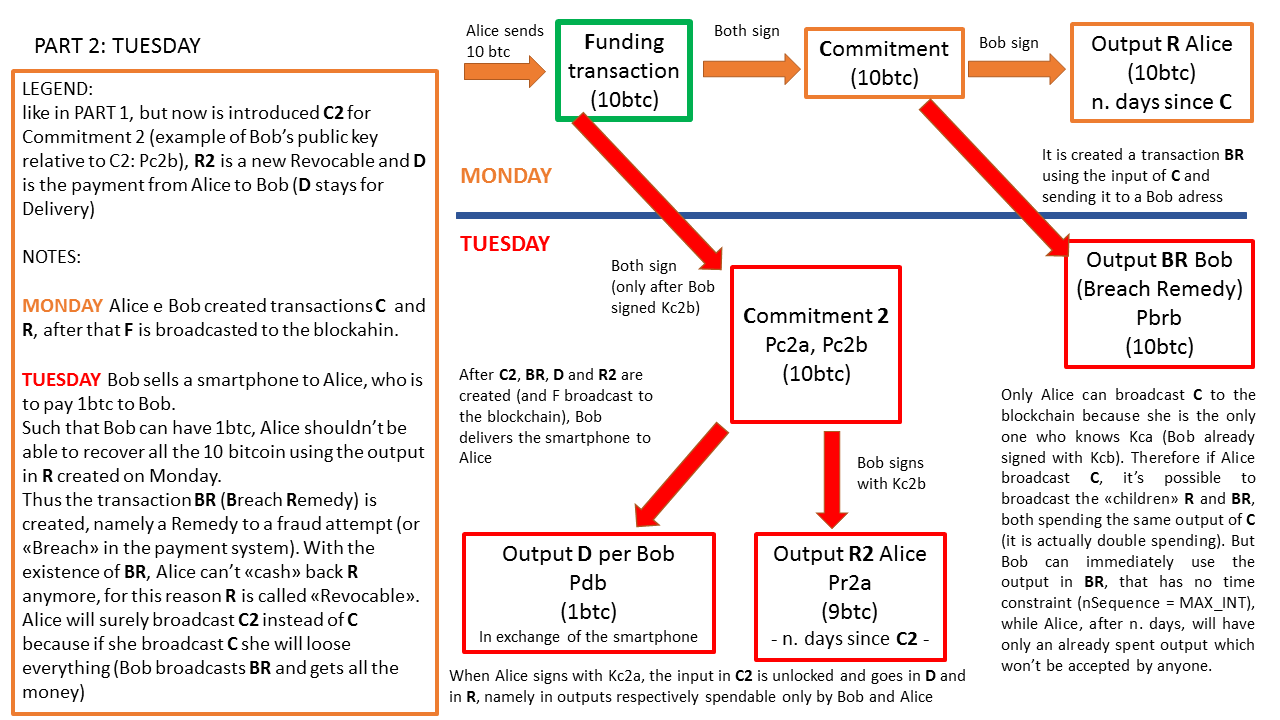 But it’s not so simple…

In the scheme above, if Alice had to broadcast she would have economic convenience in transmitting C2 instead of C1: broadcasting a previous status means to lose all the money because of the Breach Remedy. Despite this, C2 could be never signed by Alice, if she disappears (maybe hit by a bus) or simply does not act in a rational way (she could even try to blackmail Bob keeping money in check…).

Moreover, Bob could have partecipated to the initial funding transaction: i.e. Bob and Alice could have put in common 5 bitcoin each to open the channel. In this case also Bob must have the guarantee to get back his money before to agree on the creation of the Funding transaction.

Therefore a «mirror scheme» is created, where each transaction has a pair. To understand the mechanics, see the next graph. To understand the notations, keep in mind these examples: since C1 is doubled into C1a and C1b, Alices’ public key of C1a is «Pc1aa», Bob’s one «Pc1ab», while Bob’s private to move bitcoins from C1b is instead «Kc1bb» and so on.

In the next graph Bob and Alice partecipate to the Funding with 5 bitcoin each. 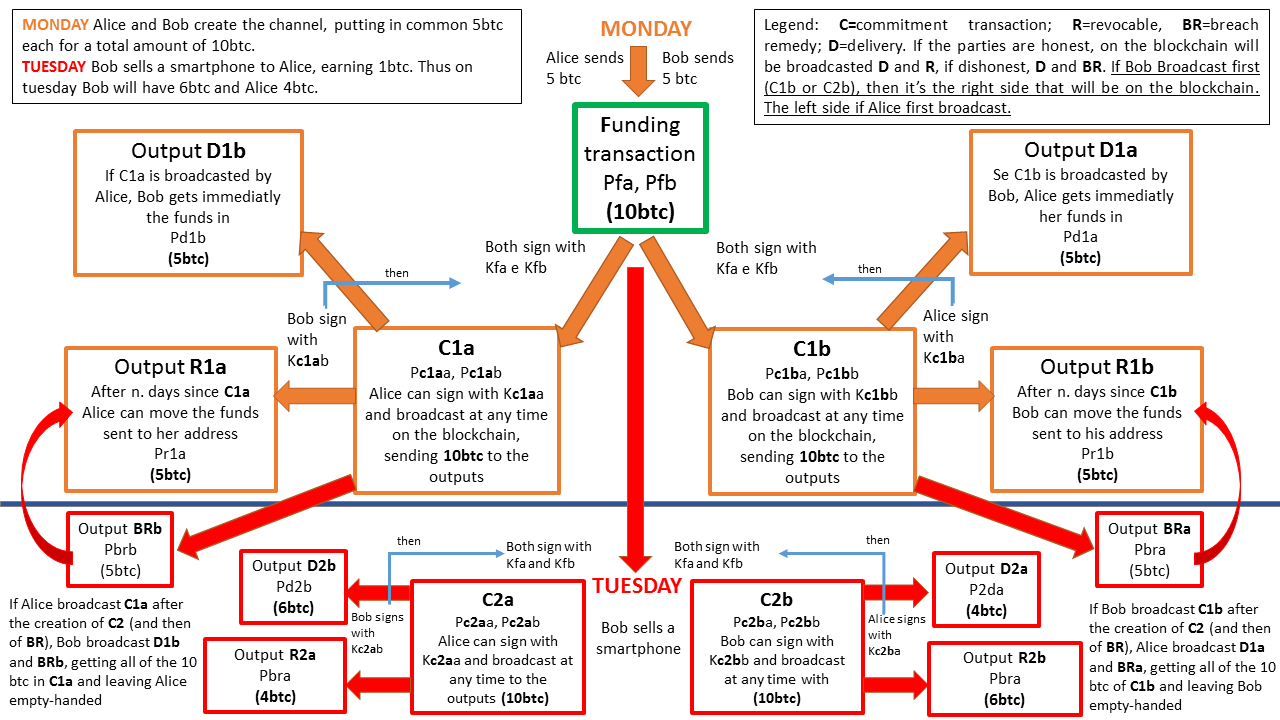 A system of «sluice gates» of water channels

Look, for simplicity, only to the left side of the graph (the right side is specular, roles reversed):

– before Bob and Alice sign with Kfa and Kfb the transaction making the 10 btc «flow»  from F to the address of C1a, Bob already signed with Kc1ab the transaction sending the bitcoins from C1a to the outputs D1b and R1a

Everything is possible thanks to the script «SIGHASH NO_INPUT» which requires a new Soft fork.

The term «to make flow» is not taken by chance, the system recalls the sluice gates of a water channel: when Bob signs a transaction opens the downstream sluice gate, though the upstream gate is already closed. Once the upstream gate opens, the water (bitcoin) automatically streams in the open output downstream. In case two outputs are open to receive the «same water» (R1a e BRb) the one which has no time constraint nSequence (BRb) receives the water before, leaving the other output empty, though open.

Why to keep the channel open is convenient

After having bought the smartphone in exchange of 1btc, Alice would have convenience cheating Bob, broadcasting to the blockchain to a precedent state (the commitment C1 instead of C2) because in C1 Alice holds 5btc and Bob 5btc, while in C2 Alice 4btc and Bob 6btc. However, Alice besides broadcasting C2a can only broadcast C1a (she hasn’t the private key Kfb to send funds in C1b), and if broadcast C1a Bob can get all 10btc: Bob in fact will be able to broadcast all the children of C1a,that is D1b e BRb, while Alice can only broadcast the child R1a. In this case BRb and R1a would represent a double spending, but BRb has not time constraint, thus it’s spent far before R1a that is, precisely, «Revocable».

What happens if Alice brings back the smartphone because her sister doesn’t like it? Simply, the new pair of transactions C3a and C3b is created, whose outputs are 5btc to Alice and 5btc to Bob. Indeed, also the two new BR (Breach Remedy) will be created, not time contrained, which «invalidate» the Revocable txs children of C2, R2a and R2b, ensuring that no one broadcasts C2 instead of C3.

For both is convenient to keep the channel open, rather than broadcasting the transactions on the blockchain. In fact, who first broadcasts the last transaction Commitment (suppose it is C2 in our graphical example) will have two disadvantages:

1) Pays the commission to the miner for the inclusion of the transaction in the blockchain;

2) Must wait the time constraint of the Revocable expires, before to spend the output for another transaction (while the other one can spend immediately, since the Delivery transaction is no time constrained).

Alice and Bob can exchange smartphone and bitcoin without never broadcast more than one transaction (the funding transaction) to the blockchain.

Between Alice and Bob a channel is open that could be permanent, until one of them try to cheat the other

Since this moment, each transaction between them (provided it is not of a greater amount than what deposited in the funding) will be off-chain.